SL’s relations with new US Govt. will be based on current ‘historic high’ platform: Ambassador Kariyawasam 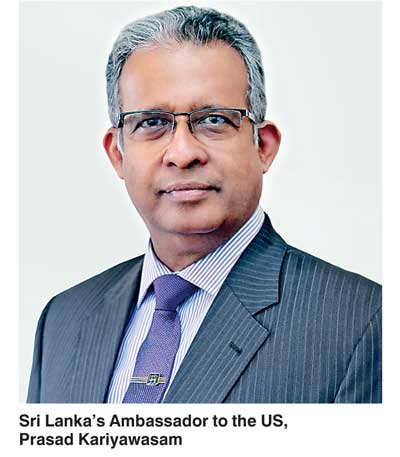 The surprising result of Sri Lanka’s presidential election almost two years ago yielded an unexpected changing of the guard and a sense of shock which lasted for a number of weeks. Two weeks ago, the US marked a similar watershed moment in its political history and it is still reeling from the reality bred by its presidential election.

On the night of the US elections, East West Centre flew the group of international journalists I was a part of from Cleveland, transiting through New York, to Washington DC, in a professional manner which demonstrated why the organisation has earned its reputation for being on target with its prearranged schedule. No one anticipated beforehand the political turbulence which would grip everyone on the ground that night. Later I felt it necessary to speak with Sri Lanka’s Ambassador to the United States, Prasad Kariyawasam, in order to find out the current status of US-Sri Lanka relations. The following is an excerpt of the interview.

Q: You are a career diplomat with extensive experience of almost three decades. You have been at the helm of diplomatic operations and cooperation between the Governments of Sri Lanka and the US during both our own Government’s political transition two years ago and now at one of America’s crucial moments. How do you see this challenge?

A. I arrived in Washington DC in June 2014 and until the end of that year it was an uphill task to promote better relations between Sri Lanka and the US, primarily due to the trust deficit that had accumulated over several years by then between the two countries.

The change of Government in 2015 gave an opportunity to create a paradigm positive shift in bilateral relations due to the policies and foreign affairs approach adopted by the new Unity Government in Sri Lanka. And it was possible to take relations to an unprecedented high which we enjoy today.

I feel gratified by this achievement for which the credit must go to the leaders of the Unity Government. Our bilateral relations are now at a historic high and my counterpart in Colombo is of the same opinion.

I consider the setting up of the high level US- Sri Lanka Partnership Dialogue as a salutary achievement. It will be the platform to manage the Sri Lanka-US partnership in all its manifestations and aspects in the future.

In fact when the TIFA (Trade and Investment Framework Agreement) Council met in Washington this year, there were three Cabinet level officials participating at the meeting - Minister Malik Samarawickrama from Sri Lanka and US Trade Representative Ambassador [Michael] Froman and UN Representative Ambassador Samantha Power from the United States. Such high level representation from the US side at a TIFA meeting was unprecedented. The TIFA has now initiated a five-year plan of action to promote trade, business and investment, including measures to provide better market access for Sri Lankan products in the time to come.

As for USAID, it has doubled its profile in our country last year, encompassing the whole of Sri Lanka. And separately, Sri Lanka has been selected for a program with the MCC (Millennium Challenge Corporation), an agency of the US Government with bipartisan support for substantial grant assistance aimed at advancing economic growth and reducing poverty in Sri Lanka.

Both the President and Prime Minister formally greeted and welcomed President Elect Donald Trump no sooner that he was elected, expressing their commitment to work with the new administration. I am confident that Sri Lanka is well placed to go forward, working with the new US administration on the basis of the excellent platforms we already have set up.

It is too early to speculate on the trajectory of a Donald Trump government’s foreign policy in its overall global perspective. However, I feel confident that as regards Sri Lanka, the platforms for cooperation we have created will stand as a good basis to take forward our relations in all its manifestations.

Q: Do you see or have there been any major changes to the ongoing events and programs already mapped out between the two Governments after the recent presidential election?

A: The ongoing events are proceeding well and as planned. In fact several high level naval engagements are ongoing.

The International Maritime Conference, entitled the Galle Dialogue 2016, organised by the Sri Lanka Navy, will get underway at the Galle Face Hotel, Colombo on 28 and 29 November 2016 (today and tomorrow). For the first time the US will be represented at a very high level at this conference, which is now in its seventh year. The Commander of the Pacific Command of the US, Admiral Harris, will lead the US delegation and in fact will be the keynote speaker at this conference, signalling that the Galle Dialogue is an internationally recognised platform for maritime corporation and discussion.

The purpose of this conference is to provide a common platform for stakeholders of national and international repute to discuss and deliberate maritime-related issues and enhance the cooperation of maritime security and the sharing of knowledge and information amongst them.

Local and foreign experts in naval and maritime affairs representing 40 countries and 12 international organisations will share their expertise and discuss matters of professional interest at the two-day dialogue themed ‘Fostering Strategic Maritime Partnership’. Seven naval chiefs will be among the distinguished participants who will include over 120 foreign delegates.

Q: What stance do you foresee the new US administration taking with regard to the UN resolution calling for an international probe on Sri Lanka’s alleged human rights violations?

And now the Government is taking action to promote, protect and uphold the human rights of all Sri Lankan citizens locally for the benefit of each and every citizen of our country despite whichever community, religion or gender an individual may belong to. It is puzzling as to why there is a tendency to view the strengthening of human rights locally with suspicion. After all, if human rights, justice and rule of law are strengthened, it is the citizens who will be empowered and their safety and security will be upheld.

Therefore there is no question of the US interfering in this process. It’s a domestic process. It is up to the Government to decide the level of international assistance required in the processes initiated by Sri Lanka itself.

Sri Lanka will require assistance for capacity building. This will help Sri Lanka strengthen the capacity of its own local institutions. Sri Lanka’s initiatives on human rights and justice are not driven by foreign governments but by the people’s mandate given to the Unity Government based on good governance principles and the Government’s commitment to also take steps to build a strong, united and progressive nation with strong institutions which will help to ensure the non-recurrence of conflict. Instability and possible scenarios of recurrence of conflict will hamper the economic progress of the country.

Q: What impact will the US‘s partnerships with other Asian giants like China and India have on Sri Lanka?

A: The US, India and China’s relations do not have any adverse impact on Sri Lanka especially since Sri Lanka’s policy towards these three countries is not a zero-sum game. Our interest is to make the Indian Ocean and its littoral a region of peace and stability, so that Sri Lanka can be the hub of economic activity in the region for the benefit of the people in the region and the world.

In fact at present we enjoy and maintain and promote inclusive good relations with the US, India and China as well as close friendships with all other countries in Asia and beyond.

He also held the position of Director General of the Economic Affairs Division and served as an Additional Secretary in the Ministry of Foreign Affairs.

Ambassador Kariyawasam hails from Galle and schooled at Richmond College, Galle. Kariyawasam was a Queen’s Boy Scout and was the Scout Troop leader at Richmond during which time he represented Sri Lanka at the 9th Australian Scout Jamboree held in Sydney in 1969.

A cricket star in school, he amassed a total of five centuries as captain of the school team in 1972, skipper of the Southern Province Schools cricket team and a member of the All Ceylon Schools Combined team.

The game of cricket in particular dominated his free time at university and he captained the university cricket team in 1977-78, in Division I, Sara Trophy. He was awarded the Most Outstanding University Sportsmen of the Year in 1978.

While playing for university in 1978, Kariyawasam was selected to represent the Sri Lanka Board President’s XI against the visiting Derrick Robins XI in a game in which his bowling skills attracted much attention with figures of 3 for 22 that included the valued wicket of David Gower, who later went on to captain England.